Below are a list of Caribbean-related events and panels before and during the Brooklyn Book Festival this Sunday, 18 September. The list may be incomplete. Events are listed in chronological order, with location noted at the end of each description. Of special note are two “Bookend” events: “Write This in Fire” on Wednesday, 14 September, 6:30pm and “Readings, Rum & Reasoning” on 17 September, 7pm. More information available at the Brooklyn Book Festival’s site.

All events free unless otherwise noted.

Celebrate the publication of Dividing Hispaniola and discuss the border campaign against Haiti with Edward Paulino, assistant professor of history at CUNY John Jay and cofounder of Border of Lights, an organization that promotes solidarity between Haitians and Dominicans. Grandchamps Author Spotlight is an open discussion of literary works highlighting Haitian affairs. Writers, scholars, and folks of the community gather for a conversation over Haitian fare  at Grandchamp Kitchen & Market.

One of Cuba’s bestselling science fiction authors, Yoss is a notorious literary rocker, as the lead singer for Havana band Tenaz. Co-hosted by BOMB Magazine, ISSUE Project Room, and Restless Books, the event will begin with a discussion of the Cuban literary and metal scenes, and the role that science fiction plays in the culture. Then, Yoss takes the stage to perform some metal classics. Ticket price includes a free drink and a copy of Yoss’ intergalactic space opera, Super Extra Grande.

Join hosts Africa is a Country and Chimurenga Magazine for a conversation between two acclaimed writers—Naomi Jackson, whose The Star Side of Bird Hillwas longlisted for the NBCC’s John Leonard Prize and the Center for Fiction’s First Novel Prize, and winner of the PEN International New Voices Award, Masande Ntshanga (The Reactive)—to be streamed live on Pan African Space Station. 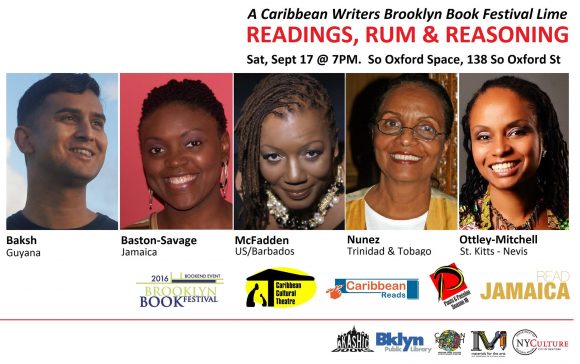 The Legacy of Octavia Butler presented by Greenlight Bookstore

Exile, Within and Without

There are various kinds of exile—from one’s country, one’s community, even oneself. Join Cameroonian Patrice Nganang, author of Mount Pleasant; Jamaican Olive Senior, author of The Pain Tree; and South African Imraan Coovadia, author of Tales of the Metric System, for a discussion of the ways, large and small, exile and displacement inform their work. Moderated by Anderson Tepper.
Borough Hall Media Room, 209 Joralemon St

Each season, the Brooklyn Book Festival chooses five debut books to present as books that we think should not be missed! This year we feature JJ Amaworo Wilson(Damnificados), Natashia Deon (Grace),Matt Gallagher (Young Blood), R.J. Hernández (An Innocent Fashion)
and Jessica Winter (Break In Case of Emergency). Novelist Emma Straub, (Modern Lovers)
will introduce the authors who will read from their novels.
Main Stage, Columbus Park

Fiction has increasingly become an outlet for writers worldwide to work through cultural pain, and to search for insight into the traumatic events that saturate media headlines. Jonathan Lee (High Dive) infuses a historic bomb plot in Thatcher’s England with new life, empathy, and interest; Karan Mahajan (The Association of Small Bombs) dissects the long term effects of terrorism on both the victims and the perpetrators; and Sharon Millar (The Whale House) tackles class divides and social tumult in modern day Trinidad. Moderated by Anna North, (The Life and Death of Sophie Stark).
Brooklyn Law School Student Lounge, 250 Joralemon St

The Racial Realities of Fiction presented by the Times Literary Supplement

Stig Abell, The Times Literary Supplementeditor, leads a conversation with T. Geronimo Johnson (Welcome to Braggsville), best selling author Esmeralda Santiago (Conquistadora) and debut novelist Ali Eteraz (Native Believer) in a conversation about race in their novels, in culture and in contemporary society in America and the UK.
Borough Hall Courtroom, 209 Joralemon St

You Can’t Make This Stuff Up

“Write what you know” takes on new meaning in recent releases by NYT bestseller Charles Bock (Alice and Oliver), novelist and short story writer Elizabeth Crane (The History of Great Things), and NAACP Image Award Finalist Bernice L. McFadden (The Book of Harlan). These novelists borrow from their own personal histories to weave beautiful, heartbreaking stories that are both intimate and universal. Moderated by Tiphanie Yanique (The Land of Love and Drowning).
Brooklyn Historical Society Library, 128 Pierrepont St

From Sci-Fi to Meta (and Heavy Metal): New Dimensions in Latin American Fiction

Magic and Mayhem in New York

NYT bestselling author Libba Bray (Lair of Dreams: A Diviners Novel) moderates a discussion on the mystique, mythology, magic, and mayhem of New York, and how the city can shape a story and its characters with authors Marina Budhos(Watched), Daniel José Older(Shadowshaper), and Sarah Porter (Vassa in the Night).
Saint Ann’s School Rotunda

First and second generation immigrants and refugees, documented or not, are living in communities across America. Through their memoirs of migration, authors Kao Kalia Yang (The Song Poet) and Dan-el Padilla Peralta (Undocumented: A Dominican Boy’s Odyssey from a Homeless Shelter to the Ivy League) and José Orduña (The Weight of Shadows: A Memoir of Immigration and Displacement) talk candidly about adapting to and confronting American life. Moderated by Moustafa Bayoumi.
Brooklyn Law School Moot Courtroom, 250 Joralemon St

On Identity and Sexuality

To what extent do discriminatory politics, social and cultural distinctions, and immigration oppress and build individuality? Join Malaysian writer Tash Aw, author of The Face: Strangers on a Pier; Jamaican-born Nicole Dennis-Benn, author of the debut Here Comes the Sun; and Swedish writer Jonas Hassen Khemiri, author of Everything I Don’t Remember, for a conversation about the freedoms and burdens of identity and sexuality and the ways in which they intersect in their work. Moderated by Emily Raboteau.
Borough Hall Media Room, 209 Joralemon St

In Salman Rushdie’s Two Years Eight Months and Twenty-Eight Nights, Elizabeth Nunez’s Even in Paradise and Michael Seidlinger’s The Strangest, there are echoes of Scheherazade’s One Thousand and One Nights, Shakespeare’s King Lear, and Camus’s The Stranger, respectively. How close the author plays to a text, and how much she or he departs, varies. Join us in a discussion about choices in using a literary classic as a muse. Moderated by Baz Dreisinger (Incarceration Nations).
St. Francis College Auditorium, 180 Remsen St