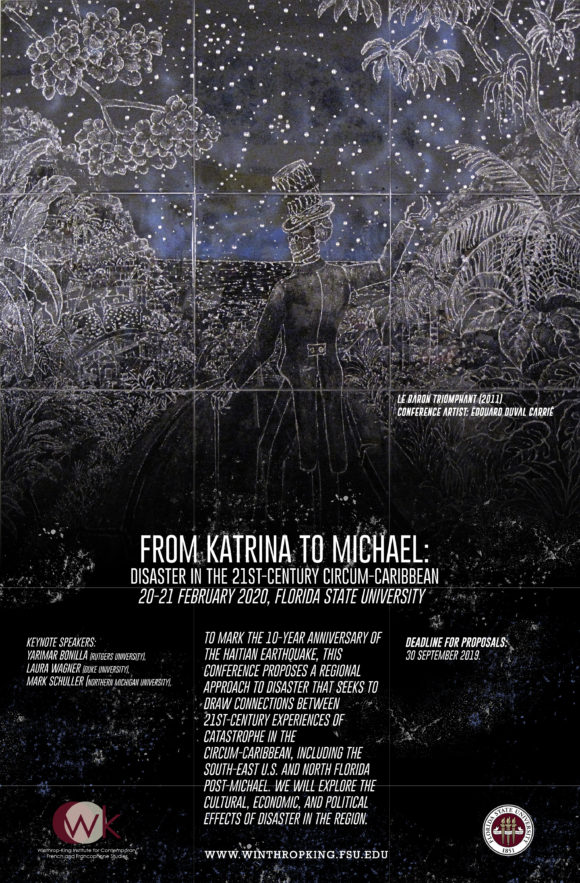 To mark the 10-year anniversary of the Haitian earthquake, this conference proposes a regional approach to disaster that seeks to draw connections between 21st-century experiences of catastrophe in the circum-Caribbean, including the south-east U.S. and North Florida post-Michael.

This comparative, regional perspective will allow us to consider, for example, how different forms of disaster capitalism encourage replacement of populations, displacing people who have longer histories in place with others who will have temporary and surface relationships to that place, transforming them into sites of skimming visitation. Such population replacement has taken place in New Orleans after Katrina, is being put into place bureaucratically in Puerto Rico after María, and is a major concern for the small coastal communities in the Florida panhandle after Michael. Likewise, mega-disasters open new opportunities for political experimentations such as the complete wipeout of public education in New Orleans or the possibility of a permanent federal shutdown in Puerto Rico.

Without suggesting that disaster is the only way through which to approach the contemporary circum-Caribbean, we welcome paper proposals on the following themes:

Please submit a 250-word abstract and short bio by September 30, 2019 through the following link.

For more information about the conference, email winthropking@fsu.edu.