The Journal of West Indian Literature presents a special issue dedicated to the novels of Marlon James. “From his first novel, John Crow’s Devil, that engages queer sexual identity, religious dogmatism and violence, through his outstanding second novel, The Book of Night Women, that focuses on slavery, racial hegemony and female agency, to The Brief History of Seven Killings, which looks at the political upheaval of the 1970s, transnational crime and popular culture, James has created dramatic renditions of Jamaican history.” (CFP)

The Journal of West Indian Literature (JWIL) is a UWI-led Caribbeanist project invested in highlighting and critically examining the prolific literary production of the Anglophone Caribbean. The journal publishes articles in English that are the result of scholarly research in literary textuality (fiction, poetry, drama, film, theory and criticism) of the English speaking (cricket playing) Caribbean and in translation from other parts of the archipelago.  JWIL also publishes book reviews, and, in time, hopes to include reviews of theatre and film productions. 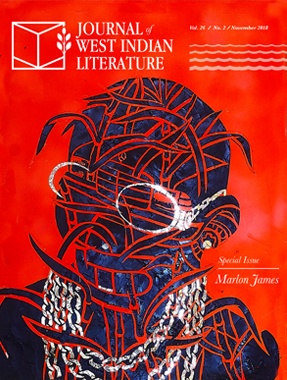 This entry is licensed under a Creative Commons Attribution-NonCommercial-ShareAlike 4.0 International license.

Need help with the Commons? Visit our
help page Send us a message
Skip to toolbar