In 1787, British Prime Minister William Pitt convened the Privy Council to gather evidence on the slave trade and slavery in the West Indies in anticipation of debates on abolition of the trade.  The report generated over a thousand pages of testimony from white male witnesses who often recounted violent scenes in which enslaved women were victims of spectacular punishment, mutilation and in various states of mortification. This paper indexes British conceptions of gender and sexuality within the form and content of this archive. Marisa Fuentes raises questions about the difficulty of historicizing spectacular (gendered) violence within exclusively white male discourse and engage theoretical scholarship on the archives of slavery in an attempt to narrate the fleeting and brutal glimpses of enslaved women’s experiences in the West Indies towards the period of amelioration.  Despite the multiple ways in which this archive is mediated by power Marisa Fuentes offers a way to read for moments when enslaved women force themselves into history. 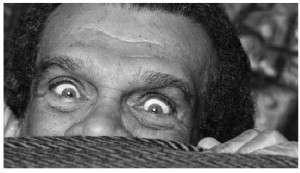 160 Schermerhorn Street (between Hoyt and Smith)

Reception By : Bacardi and Super Wings.

THE PLAY
What happens when two middle-aged guys flee the worlds they have always known and wind up on the same tropical island, one as the owner of a hotel, the other as his servant? And what if they looked at a role-reversal play as part of the hotel’s entertainment? That is the thread that weaves the storyline of this fast-paced comedy together and gives audiences a non-stop romp through cliché, humour, drama, societal roles and most interestingly, self image.
Pantomime by Derek Walcott embraces several issues of racial and cultural equality, of colonial history, and powerfully explores and subsequently deconstructs Caribbean identity as fabricated by the white European colonizer.

THE WRITER
Derek Alton Walcott, is a Saint Lucian poet and playwright. He received the 1992 Nobel Prize in Literature.  In addition to having won the Nobel, Walcott has won many literary awards over the course of his career including an Obie Award in 1971 for his play ream on Monkey Mountain, a MacArthur Foundation “genius” award, a Royal Society of Literature Award, the Queen’s Medal for Poetry, and the 2011 T. S. Eliot Prize for his book of poetry, White Egrets. 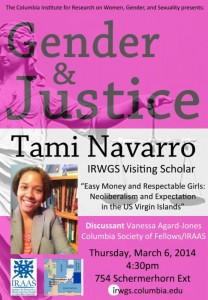 Institute for Research on Women and Gender

The Columbia Institute for Research on Women, Gender, and Sexuality presents: Gender and Justice. IRWGS visiting scholar, Tami Navarro will present, “Easy Money and Respectable Girls:Neoliberalism and Expectation in the US Virgin Islands.” Followed by a discussion led by Vanessa Agard-Jones. 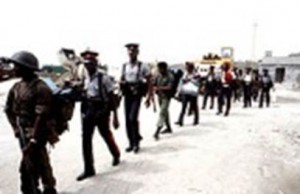 Free and open to the public. The building and the venues are fully accessible. For more information please visit http://centerforthehumanities.org/ or call 212.817.2005 or e-mail ch@gc.cuny.edu

Join Laurie Lambert, Assistant Professor of African American and African Studies at the University of California, Davis for a session that explores how the collective memory of the Grenada Revolution’s participants and regional observers is tainted by the mass violence that marked the collapse of the People’s Revolutionary Government (PRG) and the American invasion of Grenada. In Chronicles of the Hostile Sun (1984), Trinidadian-Canadian writer Dionne Brand uses her poems to discredit U.S. imperialist rhetoric and policy in the Caribbean.  St. Lucian author Derek Walcott, on the other hand, critiques the U.S. invasion of Grenada while expressing deep skepticism about the revolution in the unpublished essay “Good Old Heart of Darkness” (1984).  Read together Brand and Walcott recount the revolution as a complex example of transnational resistance to U.S. imperialism in the midst of the Cold War.

Fifty years into Jamaican independence and twenty years after the publication of his seminal work Slavery and Social Death, Orlando Patterson sits down with renowned anthropologist David Scott to discuss his creative and scholarly work and their implications in the contemporary moment. This is the closing event of our semester of revisiting “foundational texts” (see schedule here). The suggested reading for this event is the Introduction to Slavery and Social Death.

Orlando Patterson, a historical and cultural sociologist, is John Cowles Professor of Sociology at Harvard University and the author of, among other volumes, Slavery and Social Death, Freedom in the Making of Western Culture, and most recently, Rituals of Blood: Consequences of Slavery in Two American Centuries. He has also published three novels: The Children of Sisyphus, An Absence of Ruins, and Die the Long Day. A public intellectual, Professor Patterson was, for eight years, Special Advisor for Social policy and development to Prime Minister Michael Manley of Jamaica. The author of three novels, he has published widely in journals of opinion and the national press.

David Scott is Professor of Anthropology at Columbia University, where he specializes in the study of Caribbean and South Asian culture and Postcolonial thought more broadly.  The editor of Small Axe, he has published several seminal works of Caribbean thought, including Refashioning Futures: Criticism after Postcoloniality, and Conscripts of Modernity: the Tragedy of Colonial Enlightenment (which we read at the inaugural discussion session of the Caribbean Espistemologies Seminar).

Our next Seminar meeting will be on Friday, March 30, 2:30pm– 4:30pm in Room 9206 at the CUNY Graduate Center. We will be discussing selections from:

The Repeating Island:  The Caribbean and the Postmodern Perspective by Antonio Benítez-Rojo (selections from Duke University Press 1992 edition)

(These readings will be available here until the end of April and for the full year to registered seminar participants at The Center for the Humanities’ website.)

Our discussants for this session will be:

“History, Fable and Myth in the Caribbean and Guianas” by Wilson Harris

(These readings will be available here until the end of February and for the full year to registered seminar participants at The Center for the Humanities’ website.)

Our discussants for these readings will be:

(These readings will be available here until the end of February and for the full year to registered seminar participants at The Center for the Humanities’ website.)

Our discussants for these readings will be:

Our next Seminar meeting will be held on Friday, December 9, 2:00pm– 4:00pm in Room C203 at the CUNY Graduate Center. We will be discussing:

Please read the pre-circulated paper (available here until the end of December and for the full year to registered seminar participants at The Center for the Humanities’ website.)

Our discussant for this paper will be Professor Tamara Walker, Department of History, University of Pennsylvania.  Please see below for an abstract and bio.

This paper explores the routes followed by ideas and rites about the body emerging in seventeenth century black Atlantic Caribbean locales like Cartagena de Indias and Havana. Data related to the circulation of bodily knowledge in the Spanish Caribbean evinces a largely ignored process in which black ritual practitioners experimented with new materials and techne they found in the Americas and transmitted a corpus of “bodily knowledge” during the sixteenth and seventeenth century. Perambulating and interconnected black health practitioners, using oral tradition, performance, and material culture, functioned as the primordial links for the diffusion of black ideas about corporeality in the Spanish Caribbean. They shared information across ethnic lines and occupations in Spanish Caribbean locales using social practices traceable to Sub-Saharan African traditions. Within their epistemological realms, these healers probed the Caribbean landscape for medical products and explored the particular socio- cultural make up of the places where they would deploy their practices. As their European counterparts, seventeenth century Spanish Caribbean ritual practitioners of African origin –– coming from Europe and Africa or born in the New World –– engaged in procedural, conceptual, material, and social practices that had the specific objective of inquiring about the human body . Through these practices Caribbean black communities entered a larger conversation about the very nature of knowledge in the early modern era. For all the cries about their supposed primitivism and inferiority, black ritual specialists were at the forefront of the production of empirical knowledge related to the body.

Pablo Gomez PhD, MD, is an Assistant Professor in the Department of History and Geography at Texas Christian University. He works on the history of medicine and corporeality in the early modern African and Iberian Atlantic worlds. For the 2011-12 academic year Dr. Gomez is on leave on a Mellon/American Council of Learned Societies Fellowship at the Cogut Center for the Humanities at Brown University working on his manuscript Imagining Atlantic Bodies: Health, Illness, and Death in the Early Modern African-Spanish Caribbean.

Our next Seminar meeting will be held on Tuesday, November 22, 2:00pm– 4:00pm in Room C201 at the CUNY Graduate Center. We will be discussing:

“Neither Race Men nor Tragic Mulatas: Afro-Puerto Ricans and the Imperial Transition, 1898-1917” by Frank A. Guridy, Associate Professor. Departments of History and African and African Diaspora Studies, University of Texas at Austin.

Please read the pre-circulated paper (available here until the end of December and for the full year to registered seminar participants at The Center for the Humanities’ website.)

Our discussant for this paper will be Professor Melina Pappademos, Department of History, University of Connecticut.  Please see below for an abstract and bio. END_OF_DOCUMENT_TOKEN_TO_BE_REPLACED

Our fourth Seminar meeting will be held on Friday, November 4, 2:00pm– 4:00pm in Room C415A at the CUNY Graduate Center. We will be discussing:

“The Audacity of the ‘I’: Narcissism, Community, and the Textual Feminine in Francophone Caribbean Prose Fiction” by Kaiama Glover. Please read the pre-circulated paper (available here until the end of November and for the full year to registered seminar participants at The Center for the Humanities’ website.)

Our discussant for this paper will be Christopher Ian Foster, Department of English, CUNY Graduate Center. END_OF_DOCUMENT_TOKEN_TO_BE_REPLACED

Thomas Glave has graciously agreed to meet with the Caribbean Epistemology Seminar participants for a more intimate discussion before he gives the Audre Lorde/Essex Hemphill Memorial Lecture which will follow at 6:00pm.  We will discuss Glave’s essay “Whose Caribbean? An Allegory, in Part” from Our Caribbean: A Gathering of Lesbian and Gay Writing from the Caribbean and one of his short stories, “Out There” from The Torturer’s Wife. The discussion will be led by Rosamond King, Department of English, Brooklyn College/CUNY. END_OF_DOCUMENT_TOKEN_TO_BE_REPLACED

“Syndicalism as Marronage: French Caribbean Epistemologies of Labor and Resistance” by Yarimar Bonilla. Please read the pre-circulated paper (available here until the end of October and for the full year to registered seminar participants at The Center for the Humanities’ website.)

Our discussant for this paper will be Herman Bennett, Department of History, CUNY Graduate Center. END_OF_DOCUMENT_TOKEN_TO_BE_REPLACED

“Caribbean Studies, Archive-Building, and the Problem of Violence” by Deborah Thomas. Please read the pre-circulated paper (available here until the end of October and for the full year to registered seminar participants at The Center for the Humanities’ website.)

Our discussant for this paper will be Jennifer L. Morgan, Department of History and Social Cultural Analysis, NYU. END_OF_DOCUMENT_TOKEN_TO_BE_REPLACED