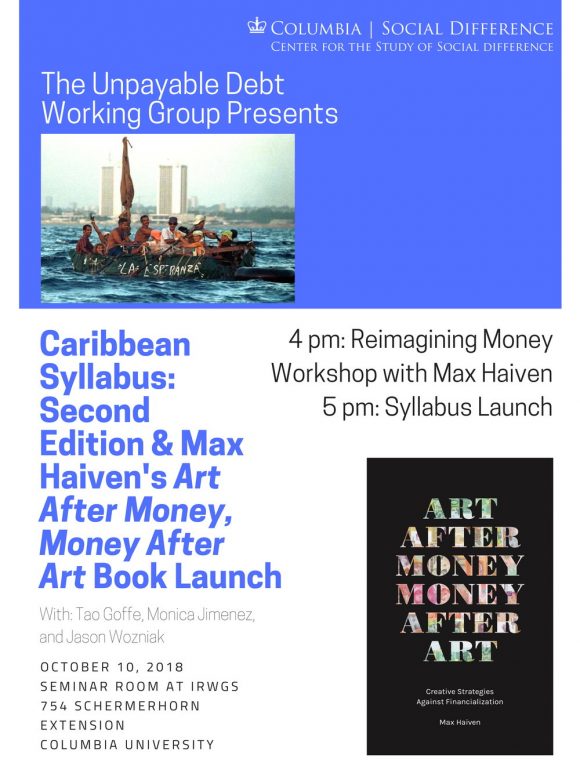 About Max Haiven:
Max Haiven is assistant professor and Canada Research Chair in Culture, Media, and Social Justice at Lakehead University and director of the ReImagining Value Action Lab.

About Caribbean Syllabus:
In May of 2018, the Unpayable Debt working group, a project of the Center for the Study of Social Difference at Columbia University, released the first edition of Caribbean Syllabus, Life and Debt in the Caribbean. The most comprehensive available public resource on the topic, the syllabus stimulated considerable conversation among scholars, journalists, artists, activists and others in the Caribbean and across the world.

As a result of those discussions, the Unpayable Debt working group created a second edition of Caribbean Syllabus with three new sections created by innovative young scholars, on indenture, law, and education. In an effort to widen the conversation, the present edition also contains translations of key syllabus sections to other important languages in the Caribbean, including Spanish, French and Dutch.

Caribbean Syllabus is the second in a series of three syllabi that the Unpayable Debt Working Group is producing. The first was the Puerto Rico Syllabus, published in 2017 and focusing on the Puerto Rican debt crisis. The last syllabus will consider debt regimes in a global context and will be released in 2019.