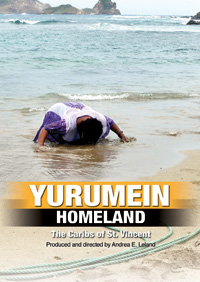 Resistance, Rupture & Repair:  The  Story of the Caribs of St. Vincent in the Caribbean

HELP GET THE WORD OUT ABOUT THIS FILM!  Host a screening of the film, review the film on your website, blog and / or newsletter, purchase the film for your library or personal use,  your mention the film in your social networking.

YURUMEIN (your-o-main) is an important UNTOLD STORY of Carib / Garifuna resistance against slavery that deserves its place in the annals of the African Diaspora. The film recounts the painful past of the Caribs on St Vincent and the extermination of scores of their ancestors at the hands of the British, while building an intimate portrait of Garifuna culture in-transition today. We are given firsthand accounts from both Carib descendants who remain on the island of St Vincent and voices of returning descendants whose ancestors were exiled to Central America—where Garifuna traditional culture was able to survive and flourish.

When members of the Diaspora are first reunited and make a collective pilgrimage to the sacred site of Balliceaux (where the genocide occurred) the film reveals the beginnings of a movement among Garifuna people to revitalize traditional language, music, dance, and ritual. This scene features the Garifuna National Folkloric Ballet of Honduras.  As Garifuna from around the world come together to remember and celebrate the lives and resilience of their shared ancestors, they also begin to discover possibility and hope for the future of Garifuna culture and a greater worldwide community. Honorary Consul Dr. Cadrin Gill, a Carib from Sandy Bay on St. Vincent  and currently practicing medicine in Los Angeles is the primary spokesman in the film.  Footage includes a dance performance with members of the Honduran National Garifuna Folkloric . The surround soundtrack includes Garifuna music by Andy Palacio, Rhodel Castillo and  music composed by Abuza from St. Vincent.  Original artwork by Garifuna artist Greg Palacio.

In 2005, I was invited to screen my film THE GARIFUNA JOURNEY on the island of St. Vincent. The film, which focuses on the Garifuna who now live in Belize played to the local audience who very moved emotionally  by the story told in the film. As they watched the descendants of exiled Garifuna onscreen, they realized that Garifuna culture, language and spirituality had flourished in the Diaspora. The Garifuna who had been living on St. Vincent became even more conscious of the disconnect between their own lives and the history and ways of their ancestors. This was a transformative experience for me. I realized then that my film only told half of the story. What was missing were the voices of the descendants of the Caribs who were not exiled and who grew up on St. Vincent. Their ancestors have lived under very repressive British colonial rule for the past 200 years. The story of YURUMEIN began that very day.

Here is what Helen Arzu (Garifuna)  says about the film: Nice quality filming and editing as well. Really good work.

1) You let the people of St. Vincent tell the story
2) You showed who they were, how and where they lived – which shows their resilience
3) Without being judgmental or didactic you made it clear what the Caribs want – they want their heritage to be recognized and respected.

Garifuna anthropologist Dr. Joseph Palacio says: The film is most appropriate for a people struggling to throw away a shameful past as they rediscover their true history. This applies to indigenous peoples, afro-descendants, and any other people to whom cultural revitalization is a painful process..  As a region the Caribbean is the crucible par excellence for such experience, for it was here where the identity of the non-colonizers was brutally suppressed and all efforts made to extinguish it permanently.