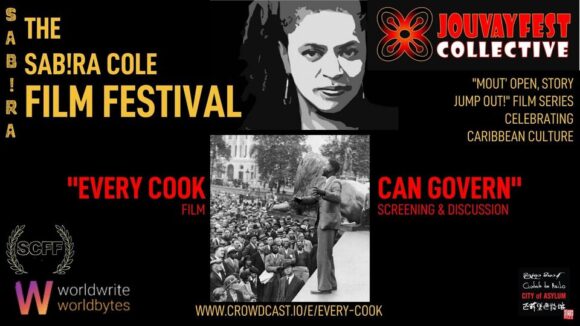 This 3rd and final installment of the series features a screening of: Every Cook Can Govern: The Life, Impact & Work of C.L.R James. This film is closely tied to Carnival traditions in Trinidad and Tobago, and attempt to capture the complex history and dynamic energy of the art form.

The program will conclude with a live panel discussion featuring some of the people closely involved with the film, moderated by Ogechi Chieke of SCFF & Sandra A. M Bell of JouvayFest Collective.

Co-director Ceri Dingle FRSA (Fellow of the Royal Society of the Arts) Director of the charity WORLDwrite and Citizen TV station WORLDbytes. Ceri Co-Directed Every Cook Can Govern and has directed and edited 11 major documentaries and over 1000 short films and videos, all made with young people learning to film.

SYNOPSIS:
Every Cook Can Govern is the first feature length documentary to explore the life, writings and politics of the great Trinidadian-born revolutionary C.L.R. James. The film interweaves exclusive, never-before-seen footage of C.L.R. James with unique testimony.

The result is an epic feature-length documentary which grapples with issues from colonialism to cricket, from slavery to Shakespeare, from Marxism to the movies and from reading to revolution. The film’s unique production history – crowd-funded, crowd-featured and crowd-filmed with over 200 volunteer camera operators, presenters and researchers – does credit to James’ conviction that every cook can govern.

Above adapted from FB event page.