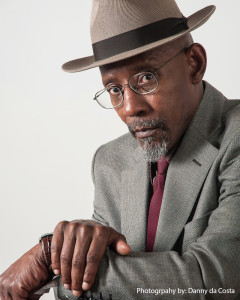 Linton Kwesi Johnson was born in Chapleton, in the parish of Clarendon, Jamaica. After moving to London at an early age and later attending the University of London’s Goldsmiths College, he began writing politically charged poetry. While studying at the University of London, Johnson joined the Black Panther movement. He started a poetry workshop, working with other poets and musicians, to address issues of racial equality and social justice. Johnson’s dub poetry, with its culturally specific Jamaican patois dialect and reggae backbeat, was a precursor to the spoken word and rap music movements. Johnson (also known as “LKJ”) remains a prolific writer and performer. His three books of poetry, 1974′s Voices of the Living and the Dead, 1975′s Dread, Beat An’ Blood and 1980′s Inglan Is A Bitch, gained wide recognition, especially among the politically and social conscious. In 2002, Johnson became the first black poet and the second living poet to be published in the prestigious Penguin Modern Classics series. He also released several albums of his work, including Dread Beat An’ Blood and Forces of Victory, both released in the late 1970s; and Bass Culture and Making History, in 1980 and 1984, respectively.

Some of Johnson’s distinguished awards include an Honorary Visiting Professorship at Middlesex University in London (2004), and a silver Musgrave medal from the Institute of Jamaica for distinguished eminence in the field of poetry (2005). His work has been translated into several languages and he has toured extensively throughout Europe, Japan, South Africa, Brazil and other nations. Commenting on why he started to write poetry, Johnson said, “The answer is that my motivation sprang from a visceral need to creatively articulate the experiences of the black youth of my generation, coming of age in a racist society” (The Guardian; March 28, 2012). (Source: “Linton Kwesi Johnson.” Bio. A&E Television Networks, 2014. Web)