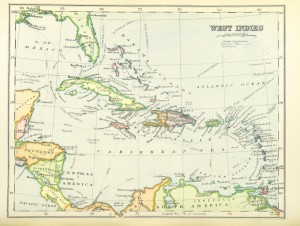 In her masterful 2012 study, From Sugar to Revolution: Women’s Visions of Haiti, Cuba, and the Dominican Republic, Myriam J. A. Chancy issues a stunning, and accurate indictment of the fields of American, Latin American, and Caribbean Studies for their disciplinary exclusion of Haiti. She writes that her aim is “to highlight the ways that racist essentialism has demarcated Haitians and other groups of African descent within the Caribbean as subalterns without agency” (xv). In an effort to contribute to the correcting this exclusion, sx salon: a small axe literary platform seeks discussion essays for a special section on Haiti in the literatures of the Spanish Caribbean. We welcome writings that represent the literary relationship between Haiti and the Dominican Republic, between Haiti and Cuba (the subject of Ada Ferrer’s 2014 work Freedom’s Mirror: Cuba and Haiti in the Age of Revolution), and between Haiti and Puerto Rico.

This special section on Haiti in the Hispanophone Caribbean literary imaginary is slated for publication in 2016. Discussion articles are typically 2000-2500 words and offer targeted exploration of the topic. sx salon, launched in 2010 as part of the Small Axe Project, is an electronic publication dedicated to literary discussions, interviews with Caribbean literary figures, reviews of new publications (creative and scholarly) related to the Caribbean, and short fiction and poetry by emerging and established Caribbean writers. Visit www.smallaxe.net/sxsalon to view past issues and for submissions guidelines.

Proposals for this special section are due by 15 January 2016 and full discussion articles will be due by 1 April 2016. Please send proposals to Vanessa K Váldes at vkv@smallaxe.net.

photo credit: The British Library on Flickr, “Image taken from page 52 of ‘British Possessions and Colonies [with maps].”